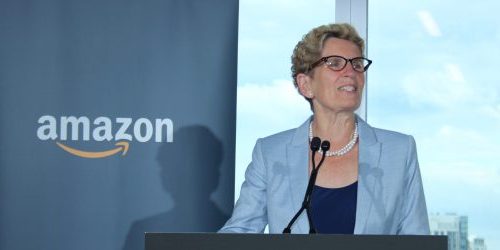 Amazon says it is already employing 600 people at the new location and plans to hire 200 more positions soon, including software developers, engineers, and programmers. The office has been operating since 2015, prior to AWS’ data centres operating in Montreal.

There’s now more than 2,000 Ontarians working for Amazon in the province. Those are exactly the types of knowledge economy, middle-class jobs that Ontario needs, Wynne says.

“There’s no question we’re in a period of transition for our economy… Amazon’s work demonstrates that very well. Technology is changing our lives every day,” she said. “That gives us two options, Ontario can either follow or we can lead. And Ontario is choosing to lead.” The office will be focused on projects such as Amazon Fulfillment Technologies, development of the voice-controlled intelligent assistant Alexa, and the suite of AWS infrastructure services. AWS also announced commitments to doing more business across the province:

“It’s nice to finally have the opportunity to take a breath and open the doors,” said Tamir Bar-Haim, the country manager for Amazon Media Group in Canada. “There’s some really phenomenal tech talent in Toronto. We’re excited to be a part of that.”

Aside from hiring more jobs in Canada, Amazon has been focused on rolling out its Prime program services to major cities across the country, he adds. Toronto and Vancouver Prime members can now get same-day delivery. Those in Montreal, Edmonton, and Calgary have one-day delivery available.