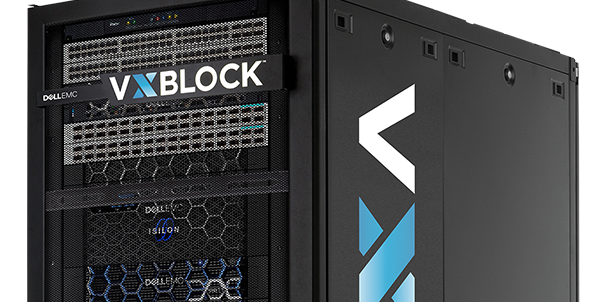 Dell EMC’s new converged infrastructure (CI) system will make it easier for people to shift from traditional data centres to a vending machine-like IT department, says the company’s vice president of product and marketing for CI.

“What we’ve done is create the ability to pool resources,” Jon Siegal told CDN. “Our customers want the ability to pick the different products and services for their applications from the vending machine.”

The new Dell EMC VxBlock System 1000, available today through Dell EMC and its channel partners, is being pitched as the foundation for that type of scenario. That foundation includes an on-premise cloud model and allows for a mix of four types of storage options: Dell EMC Unity, VMAX, XtremIO and Isilon. The machine requires fewer components to manage and support daily, reducing the overall system lifecycle administration time for multi-technologies by up to 75 per cent.

The primary audience for the company’s CI systems continues to be medium to large-sized enterprises, says Siegal, but the new VxBlock allows for multiple use cases, making it easier for new players to adopt the technology. “In the past, customers would buy a specific VxBlock model for a certain workload. Now we support multiple workloads in a single system,” he said.

General purpose – the most popular application among new customers, says Siegal – mission critical and special purpose applications can now be managed from a single model. Next generation applications, such as big data analytics, are also possible. Managing CI systems over an extended period of time can be challenging for customers, he says. The VxBlock System 1000 includes a simplified life cycle management system that veers from previous upgrade processes that included several, individual updates.

“There is one upgrade process for the entire system,” according to Siegal. “It allows customers to quickly identify what has to be upgraded and when.”

These upgrades are first tested by Dell EMC, and customers are notified when they’re ready, he adds. The new system will help IT teams focus on more important tasks while automating the more mundane ones, says Eric Sheppard, IDC’s research director for enterprise storage and converged systems.

“Converged systems like VxBlock 1000 offload the complexity and risk associated with managing enterprise-grade data centre infrastructure,” he said in a press release.