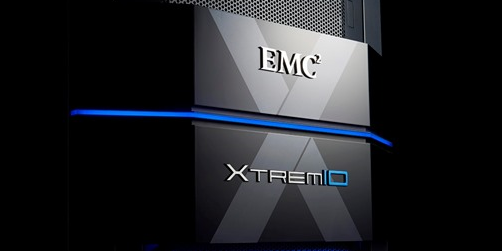 Besides new capabilities such as supporting larger all-flash array configurations and consolidating workloads at higher levels XtremIO has garnered itself a nickname: The Beast.

EMC named it “The Beast” because of its scale-out architecture that more than doubles previous density with 40TBs per X-Brick. It also offers configurations of up to eight 40TB X-Bricks with non-disruptive performance and capacity expansions that automatically re-balances data.

But can XtremIO be a beast for channel partners? Robin Ren, the CTO of XtremIO, told CDN that more than half of sales are currently going through the channel. “I think it’s one of the first products that lends itself well to a channel partner. Let me qualify this. Channel partners are not cut out of the loop with XtremIO and it has a compelling value proposition. You can go in and pitch and make a deal to boost your services revenue. XtremIO 4.0 makes the channel additional revenue than just selling the box,” Ren said.

EMC’s market position with XtremIO 4.0 is that it can help transform data centre applications through in-memory copy services. This can streamline the workflow by automating the storage through a hypervisor into the application. EMC pointed to applications such as real-time analytics, production and non-production databases, SAP, private and hybrid clouds, VDI and electronic medical health records as targets for XtremIO 4.0.

Ren added that flash is helping this business transition from spinning disk. “This is a land grab in my opinion for channel partners. There will be so much opportunity for them to replace old technology with new technology. And, it won’t be incremental sales like version XYZ plus one. This is like Nokia being displaced by iPhone. My point is for channel partners it’s a new game and it’s full of opportunity. Those who get it will have more opportunity to increase margins than they have had in the last few years. Those who don’t get it or have set their sights on just incremental upgrades will struggle with low margins,” Ren said.

The XtremIO 4.0 software along with 40TB X-Brick configurations will out this quarter.

According to Ren, there is a large opportunity for flash in the SMB space. “The question is what about the middle and how quickly will they adopt flash because sometimes they are competiting with the larger guys. It will be a matter of time and price. At the right price point with data services they will make that switch,” he said.