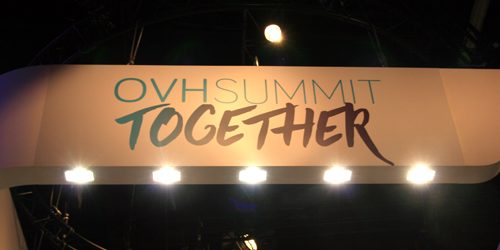 Paris, France – Roubaix, France-based data storage and Internet services provider OVH, which used its recent OVH Summit to announce an expanded push into the North American market, will be relying on a selective mix of partners both large and small to ensure its success, the company’s Montreal-based Canadian channel leader told Computer Dealer News on Tuesday.

OVH’s VP of product and marketing for Canada Cédric Combey says the company is looking for a small number of key partners to support its North American expansion.

“As of today, the goal of OVH is to develop key partners – not thousands, but a couple of key partners with whom we are doing large business together, in addition to being in touch with a greater number of small partners,” OVH’s VP of product and marketing for Canada, Cédric Combey, said. “Our goal is to find partners who are able to bring customers to the cloud.”

“We also want to develop partners outside of Quebec, because we are landed there four years ago and will be officially opening an office in Toronto at the end of October,” he continued. “So we’re also looking for partners in Toronto.”

If OVH Summit was any indication, Combey won’t have trouble finding them: vendors both large and small were happy to explain how they would support OVH’s expansion into Canada.

One of the more well-known companies setting up shop on the convention floor was virtualization software and services vendor and Dell Inc. subsidiary VMWare Inc., whose representative Hervé Basso said his company had been working with OVH on its North American expansion from the beginning, and looked forward to helping both the company and its customers identify cloud services such as software-defined datacentres that could support them both immediately and in the long run.

“Our partnership started six or seven years ago, when OVH was simply looking for good technology that would instituting a cloud and virtual hosting business,” Basso said. “Since then I have discovered that they are usually the first ones willing to adopt new technology, which sets them a bit apart from other companies in what we call our cloud network.”

Basso said that OVH has become the sort of partner that VMWare involves in its own partnership planning, noting that the latter has already invited the former to several of its virtual cloud network planning sessions this year regarding more than one product offering, and that OVH is always quick to offer valuable feedback.

“I believe our relationship is entering a chapter three,” Basso said. “Chapter one was a kind of mutual discovery… They were a different kind of company and a different type of partner… Chapter two we reinforced the partnership, and OVH made the decision to adopt most of our latest software… and now we are entering chapter three.”

“Both companies are quite mature now, as is the relationship, and based on that maturity we’re expecting to scale the relationship further, starting with OVH’s international expansion,” he said. Another well-known brand at the conference was Toshiba, which according to representative Rainer Kaise supplies storage components – a mix of hard disk and SSD – for OVH’s servers.

“They integrating these into their servers and run them in their datacentres,” Kaise said, showing off a sample server in which the company had installed the type of 3.5-inch capacity hard disks that companies such as Dropbox use for archiving, 2.5-inch hard disks, SSDs, alongside a screen that displayed their speeds.

Unsurprisingly, while the hard disks were only able to process between 200 and 500 operations per second, the SSD was processing 80,000, and an SAS installed in the neighbouring slot 180,000.

Kaise didn’t yet know whether Toshiba would be supplying the hard drives in OVH’s newest datacentres when he spoke with Computer Dealer News.

“OVH purchases from several sources,” he said. “Of course we hope that we will be recognized and have a significant share, but it depends on OVH’s internal decision.” One of the lesser-known vendors, meanwhile, was among the more trusted by OVH itself: LinkByNet’s Marthieu Demoor said his company had been hired to deploy its express migration services not only in France and Canada, France, but China as well.

“I think in the few months that I have been able to have a single face to the customer, we’ve been a one-stop shop,” he said, “delivering end-to-end service while simplifying access and usage of new cloud technologies.” Fabien Gautier’s company, Equinix, has supplied datacentres for OVH before, but not its upcoming expansion.

Equinix Inc., meanwhile, has supplied infrastructure for many of OVH’s existing datacentres, but is likely to collaborate only on network nodes for OVH’s latest venture.

“We supply a datacentre in Toronto, but OVH has their own,” the company’s business development and marketing director for France, Fabien Gautier, told Computer Dealer News. “Sometimes they need to connect to networks through our datacentres, but for the hosting of their own customers they’ve decided, basically, to build their own datacentres, because of the size of their current requirements.”

For his part, OVH’s Combey mentions VMWare as a key partner, and thinks LinkByNet will be especially useful as well, especially as his company expands further into western Canada.

“We’re already doing large business,” he said. “When we started in Canada back in 2013 I don’t think we had more than six people, and as we speak we currently employ more than 130.”

“Our next step will be Alberta and Vancouver, probably next year,” he said. “This is only the first step of the expansion.”