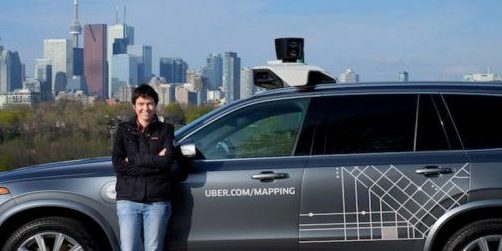 Uber Technologies, Inc. is investing in Canada and Canadian talent with its latest venture.

The company announced this week that it will be launching a new research hub in Toronto focused on developing artificial intelligence (AI) for autonomous vehicles. It will be Uber’s first advanced technologies research centre outside of the US, joining counterparts in Pittsburgh and San Francisco.

“Self-driving technology promises to make our roads safer, our environment healthier and our cities more livable,” Uber CEO Travis Kalanick says in a May 8 blog post on the company’s website. “While there’s still a lot of work to be done, we believe that the combination of our global ridesharing network with the cutting-edge software and hardware being built by our teams will make this vision a reality—and we couldn’t be more excited about what’s next.”

The centre will be led by Raquel Urtasun, an associate professor at the University of Toronto (U of T), and its Canada Research Chair in machine learning and computer science. Her work primarily revolves around developing the software that allows self-driving cars to “see” and recognize objects so they can navigate the world smoothly and safely.

Kalanick calls Urtasun “one of the world’s leading researchers” in this area.

The long-term view of autonomous transportation

It’s official: Toronto is one of the world’s best tech cities

The Toronto hub will focus on “perception, localization and mapping,” Urtasun told Forbes, but declined to comment on its budget or whether it would become a test centre for the technology.

Uber has pledged to draw from the region’s “impressive talent pool,” hiring “dozens of researchers” from the Toronto-Waterloo high tech corridor.

In addition, Uber will also make a “significant multi-year financial commitment as a platinum sponsor” to U of T’s recently launched Vector Institute for AI research, of which Urtasun is a co-founder.

This announcement comes amid Uber’s legal battle with Waymo, the company that runs Google’s self-driving car research. Waymo filed a lawsuit in February 2017 claiming a former Google engineer stole trade secrets about LiDAR sensor technology when he left the company and moved to Uber, and if successful in federal court, could halt Uber’s research efforts.

Tags: AIArtificial Intelligenceautonomous vehiclesself-driving carsu of tuberUniversity of TorontoVector Institute
Share with FacebookShare with TwitterShare with LinkedInShare with Google+Share with Pinterest