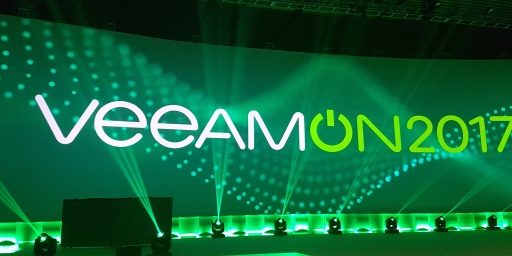 NEW ORLEANS – To reach the lofty goal of $1.5 billion in revenue by 2020, Veeam Software is dialing in on its strategic alliance partners, adding Lenovo, IBM, and Infinidat to its growing ecosystem.

These new partnerships will extend the Veeam Availability platform by providing an open API framework for its availability solution suite.

“We had decided we wanted to develop this new API, and so we figured that we needed some partners to develop this API – so we chose IBM and Infinidat,” said Andy Vandeveld, vice president of strategic alliances at Veeam, to CDN at VeeamON 2017. “Those will be the next two snapshot integration partners that we are going to have in our [Veeam Availability Suite] v10.”

Targeting Lenovo as a partner, on top of the IBM partnership, comes due to Lenovo and IBM’s pre-existing relationship. “With Lenovo, we kind of got a two for one because Lenovo has an OEM relationship with IBM,” said Vandeveld.

The three new partners join current partnerships with Microsoft, NetApp, HPE, Cisco, Dell EMC, and Exagrid. Veeam had a significant relationship with Nimble Storage as well before the company was acquired by HPE earlier this year.

HPE has often been used as the example Veeam uses as to the benefits these partnerships bring to the growing ISV. At the end of 2016, HPE began taking Veeam SKUs and rebranding them as an HPE SKU for its storage group. This means that HPE channel partners can sell these solutions and get credit inside the HPE program and the Veeam ProPartner program.

“HPE is a good example of the value that a partnership like that can have for Veeam and Veeam’s customers,” said Vandeveld. “When we move into the enterprise, those partners like HPE have longstanding relationships with enterprise customers going back decades. Leveraging pre-existing relationships is a big thing for us. And, HPE likes the idea of selling a complete solution, and not the ‘Great, we will sell you all the hardware apps that you need, but if you want data protection you have to go somewhere else’.”

Before HPE acquired Nimble earlier this year, Veeam considered the relationship that it had with Nimble a “model type of relationship”, and “as the perfect example”.

Moving forward, the company has three main objectives regarding its strategic alliances. For one, it would like to build out its existing partnerships in a similar manner to how it has extended its partnership with HPE. “We’d like to do more things like that, have more solutions developing with partners,” said Vandeveld.

Keeping in mind the four segments of SMB, commercial, enterprise, and cloud that Veeam has dialed in on, the next objective is to establish partnerships that are important to each segment. “If we are going to get from $600 million, to $800 million, to $1 billion, and $1.5 billion [in revenue], then a lot of that is going to come from the enterprise. There is a whole other ecosystem of partners that are important to that segment of the market, like global systems integrators. We have to build out those relationships and we’re starting now,” said Vandeveld.

The last part is the long-term objective, and revolves around the idea that Veeam will continue to innovate, and continue to find partners like HPE who are using Veeam solutions. “We’d like to get into solutions that have other adjacencies,” said Vandeveld.