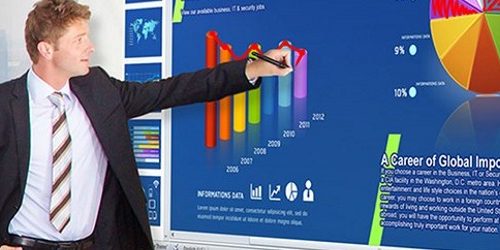 Brea, Calif.-based display manufacturer ViewSonic Corp. is on a mission to revolutionize board meetings, and its latest product represents a powerful salvo.

All three models feature UHD 4K (3840 by 2160) resolution; a 20-point touch screen; and come with the company’s own vBoard and ViewBoard Cast collaboration software, which allows multiple users to simultaneously write or draw on the device’s surface with styluses or fingers; and Zoom video conferencing software.

Canadian prices have not yet been released, though the company expects it to be available in Canada sometime in July.

“The ViewBoard interactive flat panels are developed for business and education settings, packed with features that allow users to collaborate and share content in a variety of ways, including between devices,” he said. “With the native 4K resolution, these displays deliver incredible picture quality, as well as smooth, super-fast computing and responsive touch capabilities for an immersive multimedia experience.”

In addition to their collaboration software, touchscreen and stylus support, and impressive size, the IFP50 series feature a built-in ARM quad-core processor, Android 5.0 operating system, 2 GB of memory, and 16GB storage, allowing them to perform powerful computing tasks, including slide presentations and video conferencing, and multimedia playback without requiring a PC.

Also worth noting: the display’s built-in Cast software allows users to easily share content from any mobile device, while Zoom supports video conferencing for users in up to 10 locations.