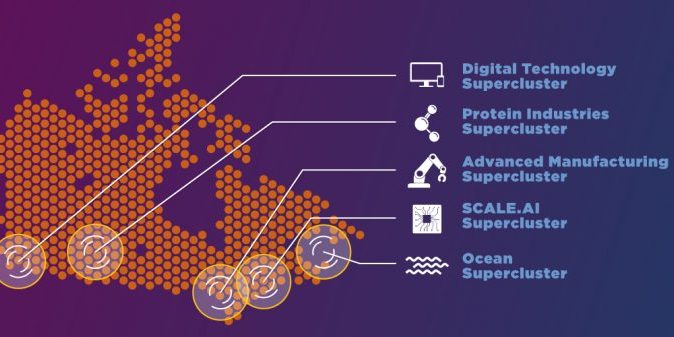 Minister of Innovation, Science, and Economic Development Navdeep Bains announced on Thursday morning that five winners will receive between $150 million and $250 million each. There were nine consortia of businesses, academic institutions, and non-profit organizations competing to carve out a sizeable chunk of funding from the federal government. That shortlist was announced last October, and now the Liberal government is sharing exactly where it’s going to be placing its bets towards its goal of generating innovation-powered economic activity across the country. The Liberals went with a regional approach in selecting five winners, with each individual supercluster representing a different distinct geographic area of the country. Each of the five winning superclusters will receive between $150 million and $250 million, according to the Minister.

Next Canada CEO Sheldon Levy, whose Toronto-based incubator will be participating in the AI-Powered Supply Chains Supercluster, said that he was pleased to be among the chosen five, but also admitted that he would have been surprised if none of the clusters had utilized artificial intelligence given Canada’s leadership position in the sector.

“Our research strength is probably second or third in the world… so I think it was a bit of an obvious pick,” Levy said. “Nevertheless, obvious doesn’t make it a winner… and I’ll bet you the ones that didn’t make it were first-rate as well. I’m sure it was a tough decision.”

Microsoft involved in 4 of 5 superclusters

“We’re very excited and proud of being part of the overall supercluster investments,” he said. “We see our mission is around digital transformation for both commercial and government customers. We see the supercluster investment as a way for us to invest in the ideas and industries of tomorrow and to really invest in building businesses that can take a leadership role worldwide. Think of this as an initial investment in technologies that will be brought to market.”

As for the digital supercluster, Hermitage says that augmented reality and virtual reality technologies will be a major focus for Microsoft. Other projects outlined in the plans include a secure health and genomic platform that will create advanced, personalized treatments for cancer patients. An “Earth Data Store” will facilitate and improve data collection and visualization for the resources sector, among other stakeholders. A digital learning factory project will develop virtual environments for use in design, rapid experimentation, and testing of cost-saving approaches in modern manufacturing.

Ending the nine-month process that saw Bains take a cross-country tour to announce bids that made the short list, the Innovation Supercluster Initiative was originally announced in the most recent federal budget. During that period, Bains explained what constituted a supercluster even while calling on groups to submit letters of intent.

“Superclusters are job-creating regions with strong economies, like Silicon Valley, and our government intends to create five of them in Canada,” he explained in October. “Through the Superclusters Initiative, we’ve started conversations and created solid partnerships between government, the private sector, academia and communities. In today’s knowledge-based economy, this collaboration is essential. Together, we are building the economy of the future, creating the jobs of today and tomorrow and gearing up for global success that will benefit all Canadians.”

There were four shortlisted bids that lost out on funding today:

CDN requested a phone interview with Stantec, and received an email response from Keith Shillington, the company’s senior vice-president.

“We are proud of our submission and the team of 48 partners who assembled to build better communities through innovation,” he wrote. The supercluster process “brought forward an opportunity to harness entrepreneurial spirit while looking at ways to transform our industry.”

The group that organized to make a bid for funding will discuss other ways it might collaborate in the future, he adds.

Included in groups that did not make the shortlist are the three information and communications technology (ICT) bids previously covered by CDN sister site IT World Canada, including the blockchain supercluster, microelectronics bid, and digital identity application.