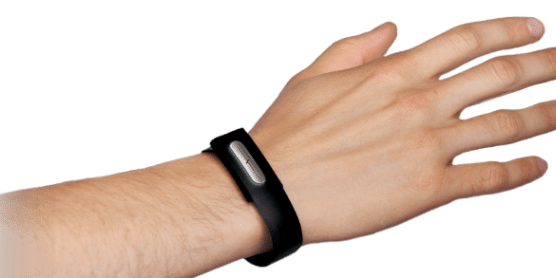 Toronto-based wearable technology maker  Bionym Inc. is making its Nymi Band hardware available to developers for the first time. At Dreamforce in San Francisco, president Andrew D’Souza shows an example of what a customer-facing implementation of this wearable might look like.

Bionym launched its first wearable technology hardware  that anyone outside the company can get their hands – or, make that wrists – on Tuesday, taking its persistent identity platform closer to general availability.

Developers have been working with emulator technology of Nymi Bands (dubbed the “Nymulator”) since the summer. Bionym’s wrist-band has sensors that can read a person’s heart beat pattern and software that can identify the unique pattern, using it as a signature to authenticate identity in a way that is always on.

Developers have been working on applications such as physical access control – unlocking doors when someone who’s both authorized to enter and wearing a Nymi Band approaches, without need for a key or number code.

Bionym will be accepting applications from developers that have worked with the Nymulator and are interested in testing on real hardware. Bionym will be reviewing video demonstrations of the apps and sending out Nymi Bands to the most interesting projects free of charge.