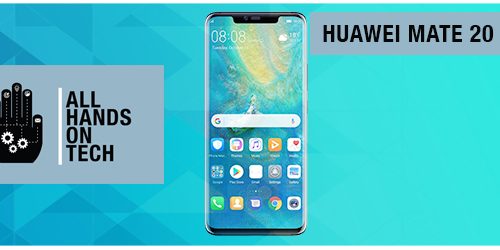 London, U.K. – Huawei launched two new phones on Oct. 16 to its flagship Mate series, and has decided it’s time to bring one of them to Canada.

During its global conference in front of hundreds of people, the Chinese-smartphone company introduced the Mate 20 and Mate 20 Pro, two premium Android devices with new features that it hopes will get the market excited and help maintain its second-place global marketshare in smartphones, next only to Samsung and just ahead of Apple.

Huawei said during a pre-briefing in New York to reporters on Oct. 2 that only the Mate 20 Pro is coming to Canada and will be available this fall with pre-orders starting on Oct. 25. The company did not say why it was only bringing the Mate 20 Pro and also did not reveal pricing, adding that detail will be released in the near future.

The phone is sleek standing tall at 6.3-inches, a little smaller than the new iPhone XS, which is 6.5-inches.

This means that there’s a 20 per cent increase in speed, 40 per cent power efficiency is improved, and the logic density has also improved.

Huawei says it’s putting two brains into this chipset. The first, that runs on an 8-bit technology, will do cognitive vision technology like identifying an object. The second, running on 16-bit technology, will handle more complex processes like real-time rendering, or natural language process, and heavy AI computing. This will be very helpful for businesses that use AI technology, Huawei says.

The phone is also IP68 rated water and dust resistant, which is great for those clumsy moments when you accidentally drop your phone in water. But obviously, you’re not going to go ahead and dump this phone, which most likely won’t be cheap to purchase.

Huawei says it is marketing this phone to those who “understand technology and use it as a tool.”

“They see technology and the intelligence it brings as a way of getting ahead of everyone else,” Peter Gauden, global senior product marketing manager at Huawei, said in New York. “They want to express themselves through engagement with technology.”

In layman’s speech, well, that pretty much means this phone is meant for people who really love technology and like to play around with different features, tech specs, and have a phone that has a weighty punch in what it can do.

Jumping right into those specs, Huawei is keeping its triple Leica camera, but this time displayed in a square in the centre of the phone on the back. It decided to get rid of its monochrome camera and will now have a telephoto lens, a wide angle lens, and an ultra-wide angle lens.

The camera’s AI capabilities allow it to detect when using the ultra wide angle lens or a more narrow focus will be better.

It will also be able to handle ultra macro photography, so you could get as close as 2.5 cm to an object and still keep the subject in focus. Most phones can only go as close as 7.5 cm, Huawei said.

Videographers may appreciate the new Hollywood cinematic features found in the camera.

You can change from a “thriller” filter to something from the black and white era. Frank Miller fans will also be able to mimic the stylistic cinematography of Sin City, as Huawei’s new phone will detect when a person is in front of the camera and will only render them in colour while keeping everything else in black and white.

The phone’s front-facing camera has 3D-depth sensing capabilities, but that basically means you can now unlock your phone using facial recognition. Huawei also decided to get rid of a home button and now you can unlock your phone by placing your finger on the screen.

The phone will be available in two colours, a black, and what Huawei calls “Twilight,” which is a blue-purple ombre effect colour.

The Mate 20 Pro will have a maximum 1.4 Gb per second download speed,  which allows it to take only seconds to download a video in 4K so long as a good LTE connection is available.

The battery will be a 4200 mAh battery, which is 200 times larger than the Huawei’s existing one, and the largest capacity found on the smartphone market. You’ll be able to charge the battery for 30 minutes and have it boost up to 70 per cent. In comparison to its other Mate phones, if you charged it, it will only have a boost up to 58 per cent.

Wait here’s the most interesting part of the new Mate phones, they have wireless reverse charging capabilities. Users have to have the capability of wireless charging on their phone in order to take advantage of this new feature. Once enabled, turn the phones facing back to back and receive an instant charge boost.