2018 CDN Women in the IT Channel honouree: Donna Wittmann

The IT channel can be an intimidating, technical industry for newcomers, especially for those with little background in digital technologies. But that hasn’t stopped Donna Wittmann from pursuing her goals and climbing the executive ladder over the course of a career spanning almost 30 years.

She started in the channel as Xerox’s vice president of sales and marketing, a position she held for 15 years before moving on to Dell Inc. for another three. Wittmann joined Cisco midway through 2009 to lead its Canadian partner organization, and later its worldwide partner sales, before deciding to follow a lifelong passion for sports and work with Tennis Canada as its chief marketing officer for almost two years. In November 2013, Wittmann jumped back into the channel by joining VMware as its executive director of commercial and partner business.

Now a partner and digital transformation consultant for VMI Collective helping the channel embrace the digital age, Wittmann’s illustrious career leading the Canadian IT channel has made her one of CDN’s honourees at this year’s Women in the IT Channel event.

As someone with a university degree in accounting and a master’s in business, she is a strong advocate for people without tech backgrounds in the IT sector. With Canada on the cusp of experiencing a severe talent shortage in tech, Wittmann’s advice could help fill much-needed roles. 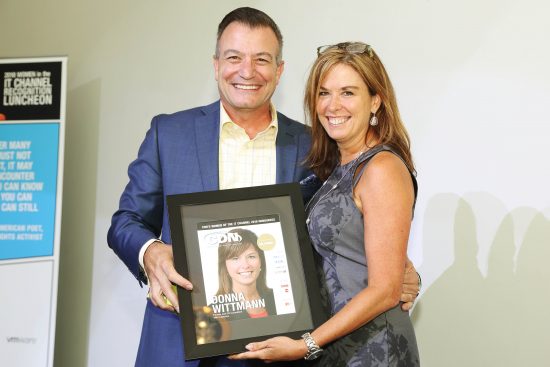 “Honestly, I don’t have a technology background and that never stopped me from being successful in this industry. I chose to focus on the business and sales side of things and I’ve done pretty well for myself,” Wittmann laughs. “I’m always trying to get in front of young people and tell them that. Young women especially shouldn’t be scared away from the tech industry just because they think they’re missing crucial skills. Tech knowledge can be learned and, in the meantime, there’s plenty of other work to do from other angles.”

Wittmann also acknowledges that despite her success in tech, the industry still has a long ways to go until it reaches gender parity. She believes mentors and role models are crucial to any career journey, and especially for women in tech.

“I’m still disappointed by the overall number of women in the technology industry because being in it most of my career, I know how great it is. There are a lot of efforts underway in terms of getting more women interested in STEM, which is fantastic, but we need to do more,” she highlights. “I was lucky in my career to have had lots of great role models: Anne Mulcahy was the CEO of Xerox when I was there, and I also worked directly for Wendy Bahr, who’s now head of Cisco’s worldwide channel, as well as Joyce Mullen, who’s the head of Dell’s global channel. I always had lots of great role models and I think that’s important for young people coming up.”

As a result, she wants the public to keep encouraging companies to make hiring women and promoting women into senior positions a priority. Young women seeing other females on top as business executives or board members can be a helpful motivator in closing the gender gap in tech and IT.

But Wittmann says she doesn’t want companies forgetting about those in the middle tier, either. She points to her employer of 15 years, Xerox, as a shining example that should be emulated across businesses of all shapes and sizes.

“I’ve seen good movements to foster more women executives, and a lot of effort to help younger women break into the industry, but we often forget about the women that are already in it but aren’t at an executive level,” she tells CDN. “Xerox did a really good job with that, actually; they kept a list of all the women in the company and every time an executive position opened up, they looked through that list to see who would be a good fit. And if there wasn’t a good fit, they used that as an opportunity to reflect on the company’s processes and policies because they were clearly failing if no women already in the company were able to fill the position.”

To hear more about what Wittman had to say about her career and women in the channel, you can watch CDN’s honouree video here.

Tags: CDN Women in the IT ChannelDigital Transformationdonna wittmannWomen in the channelXerox
Share with FacebookShare with TwitterShare with LinkedInShare with Google+Share with Pinterest