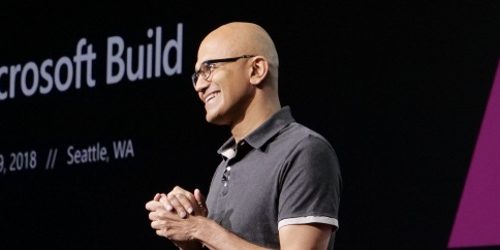 At its annual Build conference, Microsoft showcased what’s coming for the tech giant in the realm of artificial intelligence, cloud, and more, including an old Microsoft experiment finding a new home with Azure.

Microsoft wants every developer to be an AI developer

While Microsoft 365 updates for developers is still a significant focus of Build, Microsoft followed the trend of 2018 to talk AI and how developers can access AI features with Microsoft. That starts with open sourcing the companies Azure IoT Edge Runtime, which will allow developers to have more control over edge applications.

Then via a new partnership with Qualcomm, the two companies have created a AI developer kit that runs Azure IoT Edge. This gives developers the software and hardware needed to create camera-based IoT solutions, and it comes packed with Azure Machine Learning services.

Microsoft CEO Satya Nadella also reiterated the company’s responsibility to trusted and responsible AI products and practices, and said at the keynote that privacy is a human right.

To that end, the company announced AI for Accessibility, a new $25 million, five year program that consists of grants, technology investments, and expertise with the goal of using AI to amplify human capabilities for those with disabilities.

Smart assistants are taking over the world, both in the home and in workplaces, and Microsoft’s Cortana isn’t ever talked about in the same conversation as Amazon’s Alexa or Google’s Google Assistant. At Build 2018, Microsoft provided a progress report on how the Cortana will be able to speak with Alexa.

The functionality is still in a limited beta, but Microsoft demoed on stage how you can ask Alexa to ‘Open Cortana’ in order for certain Cortana-only tasks. It’s still a little clunky, as expected, but this is certainly an idea to keep an eye on. Smart assistants working together, rather than having to buy an individual device for each, seems like an idea we can all get behind. Cortana and Alexa demo at Build 2018

A failed Xbox experiment finds a new home on Azure

The Kinect is back! After launching on the Xbox 360 in 2010, Windows in 2012, and the Xbox One in 2013, the Kinect was discontinued across the board in 2017. The technology didn’t resonate with gamers, but the technology ended up as the foundation for what is now the HoloLens, and now, it has a new home on Azure.

Project Kinect for Azure is a package of sensors, including a depth camera, with onboard compute designed for building AI on the edge. Microsoft says that it is for developers working with ‘ambient intelligent’, and can ‘input fully articulated hand tracking and high fidelity spatial mapping, enabling a new level of precision solutions.’

Android and iPhone devices to work more with Windows 10 PCs

Available now, iPhones, iPads, and Android devices can integrate with Windows 10 via Microsoft’s Timeline feature. This means that users can use Timeline on their iOS or Android device exactly as they would on Windows 10, and users will be able to do this between either devices and their Windows 10 computer as well.

While for now this integration only works with Timeline, in the future, Microsoft is looking to add an Inbox app that will let you access your texts, photos, notifications, etc. on your Windows 10 PC.

Updates and tools announced for the Microsoft 365 portfolio include: