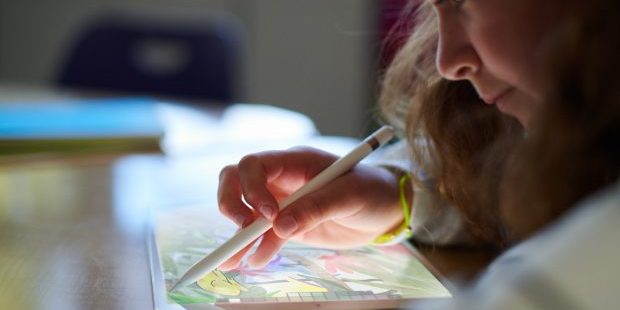 Apple Inc. is pushing further into the education sector, and at its education event in Chicago this morning, unveiled a new iPad and some complementing software.

The new 9.7-inch iPad, with support for Apple Pencil, features a large Retina display, the A10 Fusion chip and advanced sensors for apps that use augmented reality. Apple Pencil lets users write down handwritten notes and sketch ideas. It will hit shelves later this week, according to Apple, for $429 (CAD) for the 32GB with Wi-Fi model and $599 (CAD) for the 32GB Wi-Fi + Cellular model. It will also be available at Apple.com/ca and Apple Stores. Schools can buy the iPad starting at $399 (CAD) and Apple Pencil for $115 (CAD).

“This new 9.7-inch iPad takes everything people love about our most popular iPad and makes it even better for inspiring creativity and learning,” said Greg Joswiak, Apple’s vice president of product marketing, in a March 27 press release. The new iPad is able to run AR apps with its Retina display, A10 Fusion chip, cameras and advanced sensors.

Taking advantage of the new hardware is the Everyone Can Create curriculum, a free curriculum designed by Apple to help teachers integrate music, drawing, filmmaking or photography into their lessons. Apple says beginning this spring, Apple Stores will start teaching Everyone Can Create as part of its regular Today at Apple sessions for educators, which has taught nearly 5,000 hands-on Teacher Tuesday sessions on topics such as coding and app design.

In addition, Apple announced a new app called Schoolwork that builds on top of the company’s Apple Classroom app, and it will integrate support for other education apps such as Nearpod, Tynker and Kahoot. Through Schoolwork, teachers will be able to assign students digital handouts, such as PDFs and other notes, through Schoolwork. The new app will be available in June, giving teachers some time before the next school year begins. A Mac version of Classroom, which helps teachers create assignments and track students’ progress, will launch also in June.