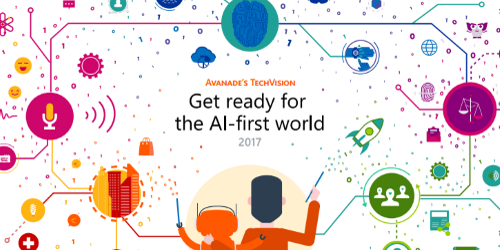 System integrator Avanade is embracing artificial intelligence (AI)  in 2017, and it believes that you should be too.

In its Technology Vision 2017, Avanade took a look at an increasingly over-saturated mobile market and turned its gaze towards the next big thing: AI. Over the next three years, the company believes that we are just beginning to see the digital disruption that will be powered by an increase in AI and automation technology.

CDN met with Avanade Canada’s general manager, Jeff Gilchrist, and technology innovation adviser, Bruno Capuano, to talk more about vision for 2017. The two made sure to emphasize that Avanade is getting ready for what they’ve penned as the AI-first world.

“Every business will be an AI-first business. This is the major disruption that will alter the digital landscape,” said Gilchrist. “Avanade’s focus on AI is to make it more accessible and affordable while also adding value to businesses.”

“A practical use of RPA in business is eliminating steps of copying the same information,” said Capuano. “Imagine buying a new cell phone or hiring a new employee, automation could eliminate those redundant steps that slow down the process.”

Those processes will only get faster as the technology grows, and that’s coming faster than we might think.

“In a year from now we’ll see multiple applications where RPA evolves and matures, and overtime those bots are going to become even more sophisticated,” said Capuano.

Will the HoloLens work as a business device?

In order to prepare for this AI-first world, Avanade has outlined five categories that companies can look toward. They are as follows:

The thinking here is that AI will reach the relationship that society currently has with smartphones and mobile apps. Everyone in their daily life now expects aspects of businesses to work on a mobile device, and the same will be said with AI technology as that releases.

AI-powered assistants like Siri, Alexa, and Google Assistant are already becoming more and more popular, and soon users will begin to expect these assistants and invisible user interfaces throughout their experience with your company.

New user experiences could come in the form of augmented reality. Everyone saw the Pokemon Go explode into the public sphere last summer, creating an opportunity for organizations to take advantage of. Whether it is augmented reality on your phone at a retailer, or a device like Microsoft’s HoloLens, businesses can take advantage of these new technologies to make an experience that is unique, and worth returning too.

But this doesn’t mean forgetting mobile applications. AI will be an extension of mobile apps, and not necessarily an entirely new concept, said Capuano.

Ask yourself: how can you use RPA and AI technology to improve your business? How can this technology make your employees more productive? Can it take them away from boring and repetitive tasks that just slow them down? Allow them to focus on the aspects of business that really push your business forward?

Avanade points out a simple truth in its Tech Vision: you can make your employees more excited to come to work if they don’t have to worry about long, mundane processes that can be down by automated technology.

Imagine if phone company A was able to decrease the phone sign-up process by half due to a new automated process, while phone company B hadn’t even thought about automation yet. Phone company A not only has an edge, but it has a better chance at retaining talent when they don’t have to sit through mundane processes.

As AI experiences pop up, Avanade has recommended ‘that businesses tear down their borders and embrace the digital mesh’ by adopting ‘open, fluid, and seamless business models.’ The company is calling is the ‘Platform Economy’.

In the Platform Economy, businesses should be prepared to take advantage of different platforms across different industries.

DesignOps is the marriage of two practices across the enterprise: modern engineering methods such as agile and DevOps, and the design thinking that focuses on adopting that human-centric viewpoint businesses need to succeed in 2017.

In order to focus on the user and the value a product provides, Avanade believes organizations will need to build up a culture, mindset, and business model from the ground up.

Gilchrist uses Microsoft CEO Satya Nadella’s regime as an example of how Microsoft shifted from a product focus to an ecosystem focus. Instead of saying Microsoft needs to win with a Microsoft device, the tech giant has instead created systems that put Microsoft content on every platform. Hence the focus on offerings like Office 365 and Azure.

Ask yourself this question: how does an AI-driven self-driving car make the decision between getting into an accident that kills the four people in the car, or drive onto the sidewalk and run over five pedestrians. Who makes that decision?

“As machines get smarter, they’re going to be helping to make decisions,” said Capuano. “There needs to be an ethical system in place that decides how we use that application.”

In the AI-first world a digital ethics framework will be required that addresses issues like data security, trust, and privacy. Guidelines about how data should be obtained and used will dominate the markets of tomorrow. And tomorrow is sooner than you might think.

“We are just now beginning to see the consequences of these tech and business decisions that we make regarding this technology,” Capuano said.