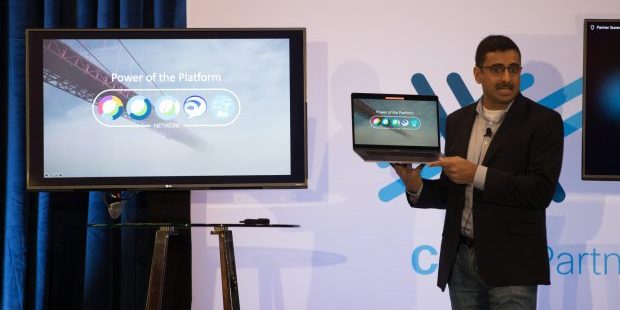 The products were shown off by Sri Srinivasan, vice-president and general manager of team collaboration group for Cisco, a former Microsoft employee and relatively new addition to the Cisco team.

“The concept of huddle spaces has been around for a few years,” he said during a news conference. “There is a new way of working upon us driven by multiple needs.”

And while these needs, such as open office concepts and remote workers, have led to, according to Srinivasan, a 20 per cent year-over-year growth rate in huddle spaces, 78 per cent of users are still frustrated with the current huddle space collaboration solutions.

Srinivasan showed off the capabilities of two new products on Monday, beginning with Webex Share, a palm-sized adapter that works with Webex Meetings and Webex Teams and turns almost any TV or screen into a presentation device without the need for wires.

The demonstration lasted only a few seconds long, but it got the message across. Srinivasan followed that up with the new Webex Room Kit Mini, a smaller version of its bigger brother that essentially provides a better collaboration experience in tight quarters.

The device has proximity sensors that turns on the screen when someone enters the room, and a microphone array designed to optimize voice volume from folks sitting on either side of it.

Its camera has a 120-degree lens that automatically corrects for fisheye distortion. Its AI features are still under development, but a brief demonstration highlighted those functions’ ability to identify the number of people in the room.

Webex Board 55 is also getting a software update that brings with it web browser access, pinch-to-zoom gestures, and sticky notes.

The Cisco BroadCloud Flex Plan is available today in the U.S., and according to the company, will be available in all BroadCloud markets by the end of the year.

Snorre Kjesbu, vice-president and general manager of Cisco collaboration endpoints technology group, told CDN that the success can be attributed to a number of factors, such as their products’ open APIs, the ongoing emphasis on video and voice and Cisco’s ability to move business to the cloud.

Srinivasan agreed, adding real-time media is critical, and many of Cisco’s competitors have struggled to improve, and more importantly simplify their collaboration business. He added his “former employer” fell into this category.