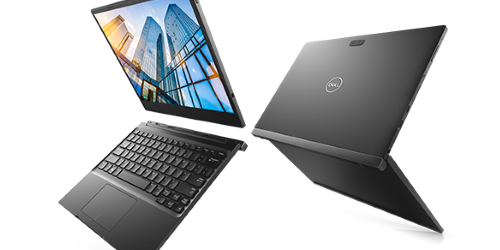 The newest addition to Dell Inc.’s Latitude line of laptops, notebooks, and tablets might be most notable for what it doesn’t include.

According to the Round Rock, Tex.-based hardware manufacturer the Latitude 7285, released in Canada this month, is the world’s first two-in-one that can be wirelessly charged.

Though Dell commercial client solutions senior vice president Kirk Schell did not mention a desire to avoid tripping over wires being among the customer requests that Dell incorporated into the Latitude 7285, in a July 7 statement he did emphasize the company’s commitment to responding to consumer feedback.

“Every detail counts, and for business users it’s the details that matter,” Schell said in the statement. “Some of the design choices that matter to commercial customers are things like optimized displays that reduce power consumption and extend battery life; removable hard drives for data security; IR camera location for video conferences; Wi-Fi antennae placement and use of lightweight carbon fiber materials for durability. We even made sure the trusted Latitude keyboard wasn’t compromised because we were designing a two-in-one.”

In addition to wireless charging, which incorporates magnetic resonance technology from WiTricity, the Latitude 7285 features a detachable keyboard, allowing it to better mimic a tablet; and can be combined with a charging mat and WiGig wireless dock (both of which are sold separately) for users seeking a desktop experience.

And just like when they’re charging the device, users can quickly remove the two-in-one from the mat without unplugging any cables.

Like the rest of Dell’s commercial PCs, the Latitude 7285 also comes with industry-leading security features, including comprehensive encryption, advanced authentication, malware protection, and Dell Client Command Suite management tools, all of which can be augmented with Dell data security solutions such as Dell Endpoint Security Suite Enterprise for data encryption and advanced threat prevention, or Dell Data Guardian for file-based data encryption.

The Latitude 7285 can currently be ordered directly from Dell at a starting price of $1449.00.