Everyone wants to work for tech companies (and Disney), SurveyMonkey finds 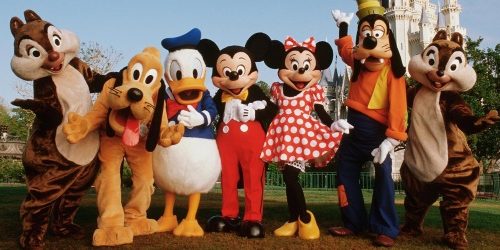 Tech has long enjoyed an employee-friendly reputation – and according to a new survey by the “People Powered Data platform”-harnessing researchers at SurveyMonkey, its only real competition is the Mouse House.

In fact, of the 14 companies included in the survey’s lists of top companies men, women, millennials, and non-millennials (respondents over 35) would like to work for, nine were tech firms: Microsoft Corp., Google Inc., Apple Inc., Intel Corp., Cisco Systems Inc., Amazon.com Inc., HP Inc., Hewlett Packard Enterprise (HPE), and IBM Corp. None of the lists featured fewer than six.

Released in July the survey, produced in collaboration with Fortune magazine, polled over 13,000 Americans of varying ages, sex, and political affiliation to find out which companies they admired most, admired least, and which they believed had the most positive impact on the U.S.

Unsurprisingly, the results varied the most along age and political affiliation, though Microsoft, Google, Apple, Intel, and Amazon (and Disney, and aerospace firms Boeing and Lockheed Martin) consistently appeared across multiple lists.

Amazon executives should also be proud to know that their efforts to place innovation front and centre in their operations, a cue followed by much of the tech industry, has not gone unnoticed. Given the current political climate surrounding the current U.S. administration, SurveyMonkey also couldn’t resist asking voters whether they voted for Donald Trump or Hillary Clinton and mapping their preferences accordingly.

Trump voters, for example, were more excited to work for industrial and aerospace companies, and also more likely to cite non-tech companies such as UPS, Caterpillar, and Ford when asked which businesses they believed had made a positive impact on the U.S. To conduct the survey, SurveyMonkey polled 13,882 American adults aged 18 and older, with respondents selected from among the nearly 3 million responses collected on SurveyMonkey’s platform on a daily basis. They were asked to evaluate the Fortune 500’s top 75 companies based on a set of five questions, with each company rated by approximately 550 respondents.

The survey was conducted online from between June 12 and 19, 2017, and the results were weighed based on U.S. Census Bureau data to reflect the demographic composition of the U.S.

You can read more about the survey here.