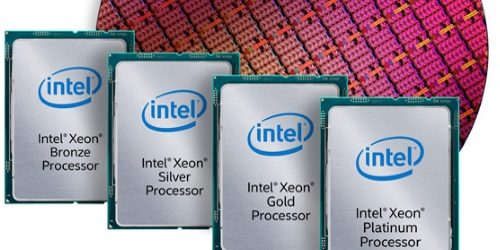 Today Intel launched its new Xeon Scalable data centre processors, calling it the biggest jump generation-over-generation in the past decade.

The new chips are 1.65 times faster than the prior generation of Intel data centre processors, and range from eight cores to 28. The company’s developers have focused on providing performance, scalability, agility, and security for enterprise workloads, specifically in the categories of artificial intelligence, networking, virtualization, high performance computing, and storage.

At an announcement event in New York, Shenoy spoke about the need for organizations to take advantage of three ‘megatrends’: cloud, AI and analytics, and 5G. For instance, he said that less than one per cent of the data collected by organizations is being used and analyzed, and therein lies the opportunity.

He points to the need for more powerful processors for businesses to take advantage of these trends, and offers the Xeon Scalable chips as the chipset to do that on.

While general availability for the Xeon Scalable processors was announced today, Intel has already shipped more than 500,000 of them through its early ship program, with many more customers getting their hands on the chips early. Intel customer AT&T was on hand at the launch event, with its chief strategy officer, John Donovan, stating that the telecommunications company has seen a 30 per cent increase in performance since deploying the processors.

“This is the biggest update for Intel in a while. It’s a platform upgrade, not just a processor upgrade,” said Scott Miller, senior director of data centres at World Wide Technology in a statement to CDN. “Intel is going beyond just performance improvements. They are giving customers platform scalability that optimzies processes and allows more workloads to run than ever before.”

The news of a leap in power could not come at a better time for Intel, which is besieged on all sides by competition itching to knock its chips out of data centres. Just last month, AMD returned to the data centre with its new Epyc chipset. NVIDIA as well has said it’s chips could be the go-to for artificial intelligence workloads in the data centre.

AMD provided a statement of its own regarding the release of the Xeon Scalable processors.

“AMD designed EPYC to address the needs of the modern data centre – now and in the future. The top leaders in the datacenter ecosystem supported our launch of the EPYC 7000-series processors, designed around the exceptional “Zen” x86 core. These purpose-built, high-performance server CPUs target one-socket and two-socket platforms with up to 32 cores and an unparalleled feature set to deliver competitive performance across a broad range of workloads and benchmarks. We are confident in the performance and value AMD is delivering with EPYC and our customers are excited about the return of competition to the datacenter.”

However, even AMD and Intel aren’t exactly competing directly, as both have slightly different approaches to data centre processors.

“AMD is targeting single-socket systems for specific workloads while Intel is pursuing multi-socket systems. Both are making significant progress in their respective areas, and this in turn is pushing the other to do even better. Increased competition is good for the industry,” explained Miller.

That’s a point that is tough to argue – everyone, customers and partners alike, win in this battle.

You can read more about Intel’s Xeon Scalable processors here.