Sage to bring accounting chatbot Pegg to Canada in July 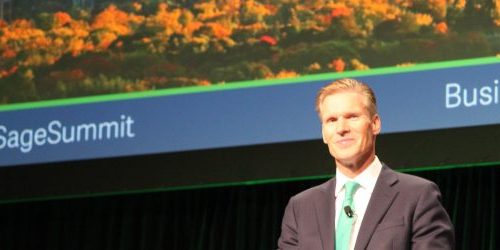 Sage Canada announced plans to open a core office in Toronto and launch its AI-backed chatbot Pegg in Canada next month at its Sage Sumit event on Tuesday.

Pegg, a chatbot that anyone can access on Facebook Messenger and exchange texts with to manage money, was first unveiled by Sage Group PLC in July 2016. The smart assistant worked as a standalone way for users to track expenses or outstanding accounts. Also next month, the chatbot will be integrated with Sage One, so it will be able to retrieve or pass data to the cloud accounting software targeting small businesses.

During his keynote, Sage CEO Stephen Kelly said Pegg was an example of the vendor’s strategy of using machine learning technologies. He referred to AI as the dawn of the fourth industrial revolution.

“What’s the entrepreneur’s least favourite thing to do?” he asked the audience in Toronto. “Admin. What if together, we could make admin disappear?”

By using a chat platform like Facebook Messenger or Slack, Pegg helps entrepreneurs easily run their businesses from a smartphone, Kelly says in an interview. It’s the first chatbot to run on an accounting engine, and it serves as a proof point of the technology and innovation that Sage can bring to the table.

It’s that interest in AI that motivated Sage to create a Toronto office, he says, expanding its Canadian presence from the headquarters in Richmond, B.C. to a Toronto office that will scale to between 100-200 people in sales, service, and technical roles.

“It makes huge sense with Pegg and other products coming out around chat bots to be located in the Toronto market,” he says. “We will be expanding our development team from Vancouver and inevitably there will be some technology folks in Toronto.” The Toronto office will also serve as a node in Canada’s financial hub, says Paul Struthers, country manager for Sage Canada. With many integrations into banks as a result of its payments business, being closer to the headquarters of those partners will be valuable.

It will also help the accounting firm form relationships with larger enterprises, as it continues its efforts to grow its customer base beyond the small business base. Its Sage Live cloud software targets midsize businesses, as does its Sage People human capital management software.

Sage also announced a new charitable effort, the Sage Serving Heroes Program that will be led by Sage Canada with support from the Sage Foundation. The program will provide business advice, mentor support, financial guidance, and software and business support to veterans competing on Team Canada during this September’s Invictus Games being hosted in Toronto. “Prosperity in of itself cannot be the only objective… there has to be a recognition you invest in cities to give everyone a fair chance,” he said. “This is a company that clearly gets that.”