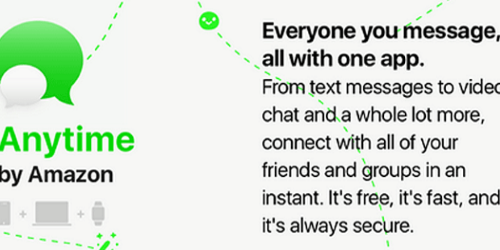 The Seattle-based tech giant is reportedly working on launching its own competing messaging app called Anytime.

According to AFTVnews, Amazon has started surveying customers about a new messaging service for input on which features are most important. Based on this survey, Amazon appears to be targeting the large social media platforms with it’s own ‘all-in-one’ messaging service.

A quick glance at the survey reveals features that could rival the likes of Facebook, Instagram, and Snapchat with basic features like messaging, voice and video calls, and the likes of photo sharing with @mentions, and filters for photos and video with similar Snapchat ‘special effects and masks’. Similarly, there could be group tasks like games, listening to music, and even ordering food.

Other features include encrypted chats that could allow users to send ‘important messages like bank account details’. Of course, users could also expect to be able to shop Amazon through the app, and similarly to Facebook Messenger, chat with businesses. According to AFTVnews, Anytime will apparently all users to ‘reach all their friends just using their name’ without needing their phone numbers. How this will exactly work is still unclear however.

This report comes a few months after Amazon announced its new chat and video service for enterprises called Chime. Amazon Chime users can expect similar functionality to that of Google chat/video, Skype, and Microsoft Teams.

Amazon has been on a tear with Alexa functionality. In May the company announced that through the Alexa App, those in the U.S. can make calls and texts with their Alexa-powered Echo devices.

And speaking of Alexa-powered devices, Amazon announced just today that the new HTC U11 smartphone will be the first Alexa-powered smartphone. HTC U11s in the U.S. can get that update today, with the same update rolling out worldwide later this year.