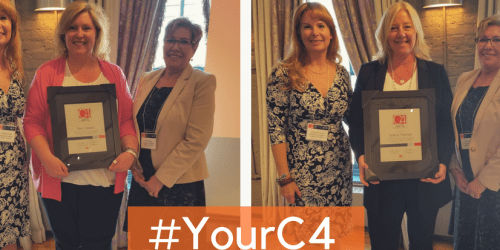 For many people, even the thought of taking an exam is stressful.

The process conjures up images of long nights of studying, fact memorization and the struggle to structure persuasive arguments for imaginary scenarios under the watchful of a stern-looking adjudicator.

While the accreditation process to receive the Channel Chief designation requires an exam to test a candidate’s knowledge of all things channel, the process created by the Canadian Channel Chiefs Council (C4) has recipients using descriptors like collaborative conversation and thought-provoking.

“The whole exercise really surprised me,” said Mary Coppard, Global Compliance Officer, SAP One, following a recent ceremony where she became the 10th person in the county to become officially accredited. “It became an opportunity for me to take a step back and see how far I’d come, and also to see where my weaknesses still create pain points.”

The Channel Chief designation was created by C4 as a way to help professionalize the top leadership position in the Channel. The designation provides employers with an assurance the recipient is well-grounded in the eight key pillars foundational to channel success.

Aspiring Channel Chiefs complete the C4 Pathways Program to earn their certification. Channel experience is crucial, but for those with gaps in their knowledge around different aspects of the industry, C4 offers a mentorship program, webinars and an emerging video series to help participants bridge the divide.

“To prepare for the final exam, I went back to the first strategic plan I created for Canada,” said Coppard. “In retrospect, it is pathetic, but it was also reassuring, in that it showed me how far I have come.”

Following her final 90-minute “conversational” exam with examiners, Coppard said she was inspired to create an “action list” that she’ll now work through for the balance of the year.

Deanna Thomson, the 9th person to receive the designation, said the experience had her reflecting “really hard” on the way she operates strategically. It became a learning opportunity in itself, said the national director of channel sales for Dell EMC .

“As you have to show your understanding of the eight pillars, you have to spend time thinking about examples of how you’ve managed in those areas. As I wrote out responses for consideration, I found I wasn’t reflecting so much on what I’d done in the past, but how I should be working now.”

Donna Wittmann, a former Channel leader now serving as a Pathways Examiner, emphasizes the exam is more of a knowledge exploration than a demanding, nail-biting, stress-inducing  quiz.

“It’s not a test. There are no yes or no answers. It’s an opportunity to go through your experience in a structured way and find where you are strong and identify where you might have some growth areas. At the end of it all, it’s a conversation with experienced examiners who simply validate what you have hopefully already figured out.”

Steve is Vice-President Marketing and Communication with ITWC. He spent 25 years in progressively senior positions as a journalist and editor with the Halifax Herald, with his final ten years as Business Editor. He has published two books and his freelance articles have appeared in national and regional magazines. He has led social media and communication efforts for two crowdfunding ventures and written and directed numerous dinner theatres for charitable endeavours.