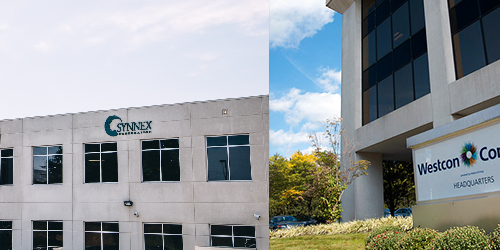 When the news broke three months ago that Synnex acquired Westcon-Comstor Americas, solution providers, specifically those in Cisco’s partner network, waited in anticipation to see what if anything changed. Now that the deal is complete it is relatively status quo. However, there is one leadership decision to take note of for Canada. Siobhan Byron, the GM of Westcon Canada will continue to report to Andrew Warren and not Mitchell Martin, president of Synnex Canada.

Warren was promoted in September of last year to the role of executive vice president of North American business, responsible for driving the company’s U.S. and Canadian operations. Warren replaced Canadian executive Lynn Smurthwaite-Murphy who left the organization after 18 years of service.

What will be different is that Warren will now report directly to Peter Larocque, Synnex’ President of North American distribution. Larocque has a strong Canadian connection as he is a graduate from the University of Western in London, Ont. Larqocque reports to another Canadian executive CEO Kevin Murai.

Previously Warren directed the security solutions practice at Westcon growing that base past the billion dollar mark and today this business is roughly half of all Westcon-Comstor revenue.

The statement released by Westcon-Comstor is from its parent company, Datatec Ltd. that read: the sale is now completed that would include Westcon/Comstor’s divisions in Canada, the U.S. and Latin America. There is also a minority share in the Europe, Middle East and Africa division.

Also Datalec plans to continue to run Westcon-Comstor International’s business for parts of EMEA and AsiaPac.

Murai added that both companies can leverage each other’s expertise, products, and services. And, there will be no disruptions to any service levels for customers of either Synnex or Westcon/Comstor.