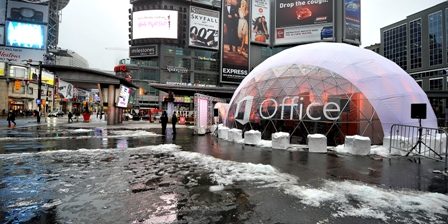 Toronto – In a makeshift dome structure built specifically for the launch of Office in Canada, Microsoft Canada president Max Long said the re-invention of Office-as-a-Service will impact the billions of users along with channel partners and retailers.

Look for Office 365 for Business to be released in Canada on Feb. 27th.

What makes these versions of Office different from the previous iterations is that they have all been designed as a cloud service and for users with multi-devices.

Today’s Office productivity suite can be accessed by five devices including Windows 8 touch-enabled tablets, PCs and even Macs. The new versions of Office will come with 20 GB of extra storage through SkyDrive and Skype calling of at least 60 minutes per month.

The subscription price for Office 365 Home Premium is $99.99 per year and that gets you five licenses for home use. The Office 365 University package is $79.99 for a four-year subscription.

“Individuals and families are using more devices then ever before. These people want to be better connected to family members and they want to carry their documents with them as well as stay connected on Skype,” Long said.

Long, who is based in Toronto, added that he is typical of most users as he has a son back in Seattle, parents who live in the U.K., a Brother who lives in Norway and he communicates with all of them on Skype and shares photos on SkyDrive.

Since Office has been re-invented, Microsoft is also working to position its channel partners and retailers across Canada on the new Office business model.

Jason Brommet, Microsoft Office Group Manager for the Canadian operation at Microsoft told CDN that solution providers and retailers should look at the new Office as a “basket of goods”. “If I sell one copy of Office; I’ll get this much margin, but on a PC or a tablet my margin stretches and multiplies,” he said.

Brommet added that another successful add-on could be accessories and data plans with 3G.