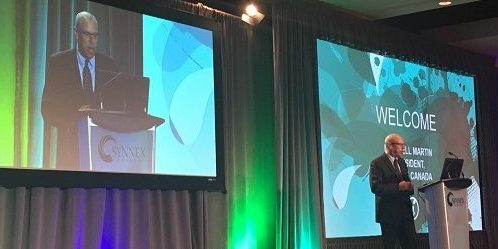 A year after the Westcon-Comstor acquisition was finalized, Synnex Canada has fully integrated their systems and is anticipating positive results in the Canadian market.

At the Synnex Inspire 2018 conference in Toronto on Wednesday, president of Synnex Canada Mitchell Martin said the company’s number one priority heading into 2019 is the new integration with Westcon-Comstor, noting that the full integration was completed earlier this year between May and June.

Martin told CDN that customers have been extremely interested in the new partnership. “It [was] like holding the flood gates back,” he said. And now that the systems are integrated, Canadian customers of both Synnex and Westcon-Comstor have access to both line cards and hundreds of new vendors.

The acquisition, which was confirmed last September, will have a significant impact in the Canadian market, as CDN had previously reported, and Martin said there are three main goals with this new integration: Helping the U.S. company leverage Synnex Canada’s strong position as a leader in the SMB market, making hundreds of Synnex vendors available to Westcon-Comstor customers, and allow re-sellers who prefer Synnex to buy the Westcon-Comstor line card. Many partners, according to Martin, have been anxious to buy those products from Synnex.

Even with the only recent platform integration, Westcon-Comstor has already added value, indicated Martin. He told CDN late last year that he hoped the company would help Synnex dramatically improve its line card and three key areas: security, networking and unified communications and collaboration. Synnex recently saw double digit growth in security, while unified communications and collaboration, added Martin, was also a significant growth area in the past year as well.

Another partnership that comes from the acquisition is with Cisco. “[Cisco] believes that they are under indexed in SMB in Canada and they believe that we will change that,” stated Martin. “It’s very challenging to penetrate SMB especially with more complicated solutions, but we’re very good at it and that business is growing very nicely for us.”

Other areas that saw significant growth in the past year, digital signage with its VisualSolv line experiencing double digit growth as well as a large growth in PC clients thanks to interest in notebook devices such as the Microsoft Surface. Martin said that the cloud platform is also becoming more robust, with Synnex adding more vendors in that business. He calls it a key area for Synnex in terms of setting up for the future and says the company has scaled the organization and enhanced the tool or order to prepare for continued and future growth.

The Canadian company has added more than 700 new customers in 2018 to date. Martin told CDN that it plans to continue its growth in areas such as cloud and the SMB market, while keeping the Westcon-Comstor integration as a number one priority. In addition, the company has plans to double down on its investments in the area of services and increase its shares in the Canadian valued added reseller (VAR) market.