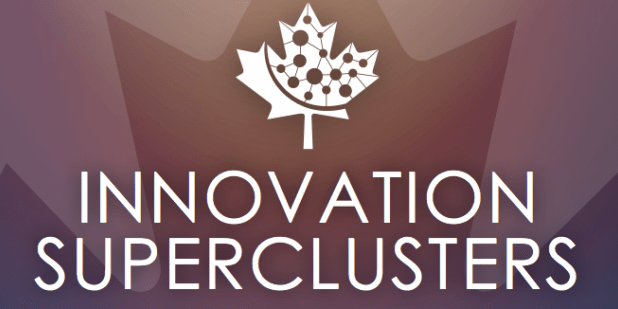 The Government of Canada has announced funding for three of the five superclusters from its $950 million Innovation Supercluster Initiative.

The five superclusters were originally chosen in February from a shortlist of nine potential contenders that saw Innovation, Science and Economic Development Minister Navdeep Bains travel cross country to choose the top superclusters, hoping to grow Canada’s economy and create jobs in the knowledge sector. One of the requirements of receiving federal funding was to secure at least an equal portion of funding from the private sector.

The manufacturing cluster received the most funding of the three, with Bains announcing that the federal government is investing $230 million.

The group of businesses, post-secondary institutions and non-profits involved, plan to “build up next-generation capabilities, such as advanced robotics and 3D printing,” stated a press release. It is predicted that this supercluster will create more than 13,500 jobs and add more than $13.5 billion to the Canadian economy over the next decade.

The protein and ocean superclusters both received $153 million in funding. Protein Industries Canada plans to use the funding to increase the value of crops and help meet a growing demand for plant-based meat alternatives in North America. It is set to create more than 4,500 jobs and add $4.5 billion to the economy.

The Ocean Supercluster plans to “harness emerging technologies to strengthen Canada’s ocean industries such as marine renewable energy, fisheries, aquaculture, oil and gas, defence, shipbuilding and transportation,” add 3,000 jobs will be created and $14 billion making its way back into the economy.

The remainder of the Innovation Supercluster Initiative funding leaves almost half the remaining investment for the Scale.AI and Digital Technology superclusters. The funding for both set to be announced next month according to The Globe and Mail.

Plans for the digital supercluster include work on augmented and virtual reality as well as work on a genomic platform that will create advanced, personalized treatments for cancer patients, and more, according to Jason Hermitage, vice-president of public sector at Microsoft Canada.

Hermitage told ITWC that Microsoft is heavily involved in at least four of the five superclusters including, protein, advanced manufacturing, the ocean as well as the digital supercluster.

Overall the superclusters are set to grow the Canadian gross (GDP) by more than $50 billion dollars over the next ten years. More than 600 businesses, post-secondary institutions and industry participants are involved across the clusters.