Speaking to partners at the vendor’s Worldwide Partner Conference on Monday, Ballmer staked a leadership position in the cloud for Microsoft and called Office 365 a key proof-point, both of market acceptance of the cloud model and of the Azure-based infrastructure Microsoft is building-out globally to support Office 365, and soon partner-developed offerings too.

With the world marching to the public cloud, Ballmer said Microsoft is making sure it gets the low latency, high bandwidth, high security and high privacy considerations that customers expect right as it ramps-up Office 365.

“We’re investing in that infrastructure to support our own applications like Office 365, and Azure is being proven out and tested,” said Ballmer. “Then it’s there for all of you to deliver your solutions to your customers.”

Microsoft is bigger in the public cloud than you might think; Ballmer said Google is No. 1 in public cloud infrastructure but Microsoft is second, ahead of Amazon and others. And with, according to Ballmer, 60 per cent of customers saying they want one provider for both public and private cloud, Microsoft is investing there too.

“We think we’re the only vendor that can offer both,” said Ballmer. 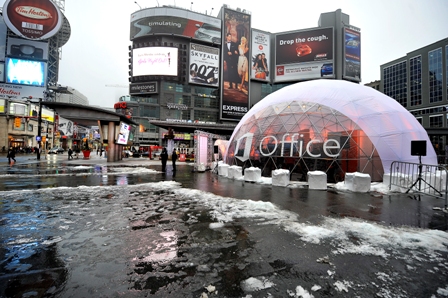 The vendor launched its Office 365 Open program, which allows partners to manage end-customer billing, into the channel this spring with the midmarket SKU. Now an SMB SKU, three enterprise SKUs, and versions for government and education have been added to the channel program

“Now, that’s a big deal because Office 365 is already one of the most heavily incented products that we have, and this is just going to massively expand the surface area for partner opportunity around Office 365 through Open licensing,” said Jon Roskill, corporate vice-president of Microsoft’s worldwide partner group. “We’re also going to make available transition SKUs. We’re finding that a lot of customers, they get into something like Small Business and they want to go to Small Business Premium. And previously you haven’t been able to do that. And now partners are going to be able to offer those transition paths to customers as well.”

Jason Brommet, director of partner business and development with Microsoft Canada, said the vendor has developed a strong base of Office resellers in Canada and the market reaction to Office 365 since launch has been strong.

“We’ve had a great year in Canada for Office 365, from the SMB through the enterprise, and there’s an incredible opportunity for our partners to continue to make money and accelerate their growth,” said Brommet. “More customers are ready to move to the cloud; the question is which partners will be the ones that are there to serve them. The market is ready.”

To highlight the market readiness, Microsoft released an IDC Corp. study on Tuesday that indicates partners that have move to the cloud are growing faster that haven’t. The study found that partners with more than half of their channel coming from the cloud grow at double the rate of their non-channel peers, get new customers two-times faster and generate 30 per cent more revenue per employee.

Darren Bibby, program vice-president of channels and alliances research with IDC, indicated that the cloud model is definitely the future and offers lucrative opportunities for partners. He cautions though that the cloud early adopter partners tend to be more innovative and efficient than their peers to begin with, so not all partners that move to the cloud are likely to achieve similar numbers.